Report a Claim Member Access
When autocomplete results are available use up and down arrows to review and enter to select.
Mar 5, 2018

State of the Maritime Industry - March 2018 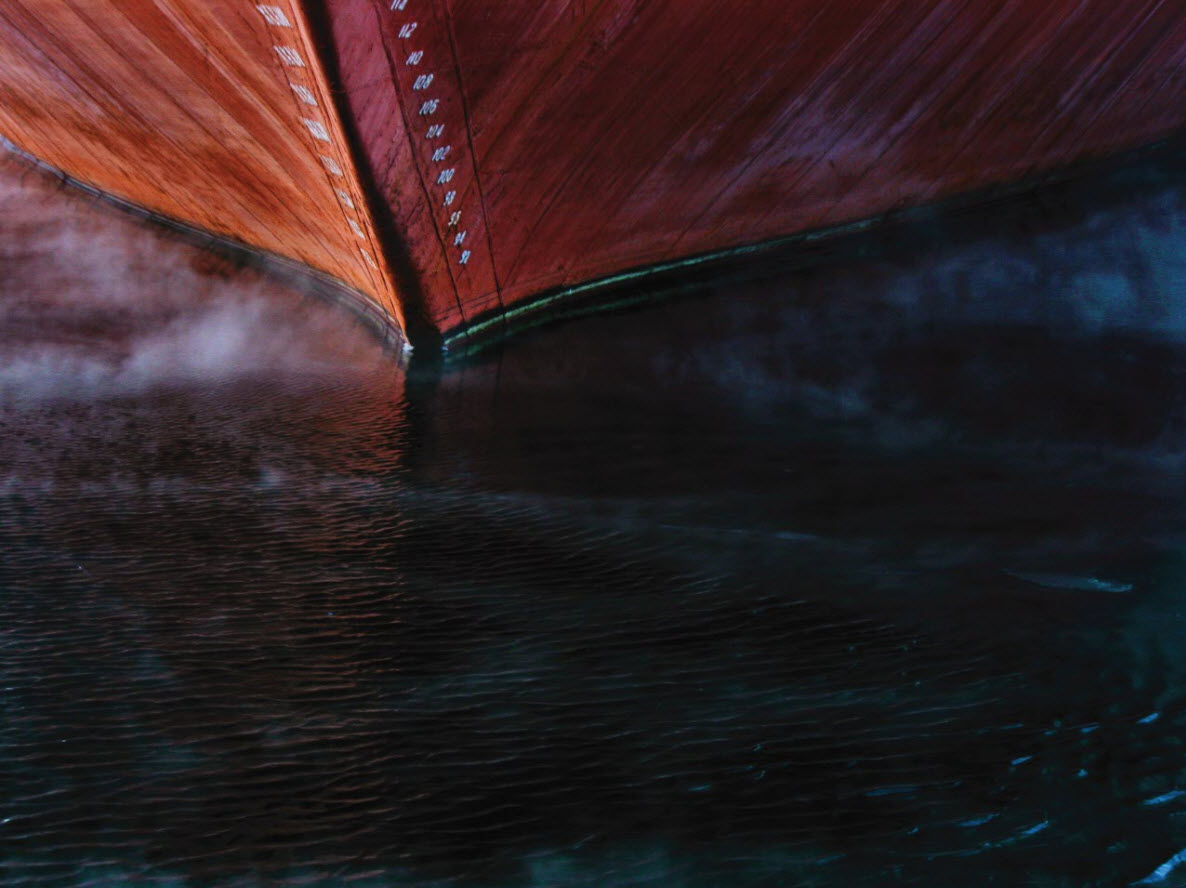 POSITIVE SIGNS EXIST, BUT THE TWO-YEAR OUTLOOK FOR THE MARITIME INDUSTRY REMAINS HAZY 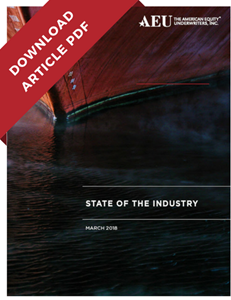 John Crowley, president of the National Association of Waterfront Employers, and Matt Paxton, president of the Shipbuilders Council of America, offered their outlook at a recent meeting of the ALMA Member Advisory Council.

Both say the domestic economic outlook comes as welcomed news for employers overall.  Based on predictions for U.S. gross domestic product, the key economic measure, the nation’s economy is expected to grow by a respectable 3 to 3.5 percent through 2019. That should keep consumer spending healthy, along with demand for buying — and shipping — consumer products.

With operations in all 50 states, 110,000 direct jobs and an estimated $37 billion economic impact, the shipbuilding industry alone remains a major part of U.S. job growth.

“Every shipyard job generates 2.6 other jobs out there, so that’s roughly 400,000 just from our industry alone. We have an impact on our economy,” Paxton says.

“Our guys are highly hirable. If a shipyard has to let people go, those guys don’t wait around. They get hired into construction services, as electricians, as plumbers.”

But that also creates a double-edged sword. Paxton says shipyards often are unable to ramp up quickly. “We’re kind of one of those fragile manufacturing sectors in that if we don’t maintain our industrial
base, it’ll go away.”

The outlook for new ship construction is somewhat mixed as well. Globally, the world fleet order book hovered around 7 percent throughout 2017, though the rate fell later in the year to the 3 percent level.

The military and government sector, which accounts for about 70 percent of new construction, could be poised for major growth. But the outlook for the commercial side is a real question mark.

Optimism for military construction stems from the Trump administration’s stated intention to build the U.S. Navy fleet, possibly by as many as 75 new vessels.

Burgeoning interest in unmanned vessels could be a growth opportunity as well, Paxton says, along with replacing academy training ships and science vessels like large icebreakers.

On the commercial side, construction growth has been slower as the oil and gas industry continues recovering. Nevertheless, Paxton said, shipyards are  busy, building container ships, tugboats, fire boats, and ferries.

Interest is building among commercial fishers in the Pacific Northwest for new vessels. One factory trawler represents a $500 million investment.

“They’re complex vessels, and that market is going to continue to grow,” says Paxton. “It’s a $6 billion fishery industry [in the Pacific Northwest], so it’s not like these guys don’t have money to spend.”

But many fleets are aging, raising questions over how they will be replaced and updated.

“What are the big vessels we’re going to build? Big container ships, big tankers, is that market going to be there?” he asks. “Large vessel construction is going to be a question mark, I think, for the next few years.”

For many maritime facilities, revenue is chiefly a function of rates, which have been volatile at best. The summer of 2017 saw new records set in both import and export volumes. Historically, volume has been the key metric because of its role in determining contracts. As Crowley points out, “The long-held assumption is that volume heals all wounds.”

But other trends have tempered the enthusiasm over volume, namely falling spot rates, which began falling in the second half of 2017 for both inbound traffic from Asia to the East Coast and eastbound Pacific traffic.

While that may come as good news for shippers, it means lower revenue for stevedores and terminal operators. On top of that, margins remain thin, meaning even with higher volumes, many shippers have not seen a comparable rise in profits.

Crowley says 80 percent utilization is the typical benchmark for the more automated terminals to reach profitability. Even with the increased efficiency of technology, many cost centers such as electricity, for example, remain fairly constant regardless of utilization levels.

And while volume had been the traditional determinate in contracts, volume’s role has been supplanted by the rise of big-box retailers like Walmart, Target and Lowe’s. Such retailers control huge amounts of volume and, therefore, the bulk of power with the contractual process.

In addition, terminal operators and carriers no longer place the same emphasis they once did on affiliating with specific carriers. Though there are some notable exceptions, the result is a further leveling of power in the contractual process.

Like any regulated industry, the actions of those in Washington, D.C. can have significant repercussions for marine-related companies. The industry will continue watching several issues, including the uncertainty regarding various international trade agreements.

The Caribbean Free Trade Agreement is a particular concern. Questions have begun swirling over a possible loophole in the agreement that would allow ship repair jobs to move to the Caribbean. Paxton says losing that business would jeopardize the future of repair companies along the Gulf Coast and perhaps parts of the East Coast.

Paxton also raises caution over the Trump administration’s decision in September to briefly waive the Jones Act. The federal rule, which is crucial to the U.S. maritime industry, mandates that goods shipped within the United States are transported on vessels built, owned and operated by Americans.

The administration agreed to a 10-day waiver to speed relief efforts for hurricane-ravaged Puerto Rico. But Paxton says the move was unnecessary and created uncertainty over the government’s commitment to enforce the Jones Act.

“Even for a period of 10 days, just waiving the Jones Act does have a chilling effect on the market,” he says. “Those private companies are going to say, ‘Do I want to build that next asset if the Jones Act can be waived here and there?’”

In addition, federal lawmakers’ reliance on continuing resolutions (CRs) over the past several years leaves the industry vulnerable as well. CRs are spending measures that allow Congress to sidestep passage of a federal budget by funding government operations on a short-term basis.

Critics complain that CRs lead to instability in government services and among private contractors like marine companies that rely on government spending.

Paxton points to another consequence of ongoing CRs — the specter of across-the-board spending caps if a CR is not passed in time.

“If we don’t pass our appropriations by the end of September each year, that stops money going into government ship repair,” he says. “When that stops, we have to lay off folks, so we constantly see this struggle with our government ship repair yards. They’ll have 4,000 employees and then have to go down to 2,000, and then try to ramp back up. It’s no way to run a business.”

The U.S. maritime industry represents a unique intersection of legal, political, economic and international trade issues. Keeping our members informed about these issues is just one way The American Equity Underwriters benefits members.


CONTRIBUTORS TO THIS ARTICLE

Mr. Paxton was selected to be the President of the Shipbuilders Council of America (SCA) in 2007. In this capacity he advocates for a robust and  expanding U.S. shipyard industrial base. Mr. Paxton is also a lawyer, focusing on maritime law and environmental issues.

Previously, Mr. Paxton served as Senior Counsel on Maritime, Oceans and Atmosphere for the U.S. Senate Committee on Commerce, Science, and Transportation. Prior to joining the Commerce Committee, he served as Legislative Director for Senator Stevens from 2004 until 2005. From 2001 to 2004, Mr. Paxton was a Legislative Assistant to Senator Stevens.

Mr. Paxton earned his B.A. degree in Political Science from the University of Washington in 1997 and his J.D. degree from Willamette University College of Law in 2001. He is admitted to practice law in Washington State.

Mr. John Crowley was appointed Executive Director for the National Association of Waterfront Employers (NAWE) in March 2014. NAWE serves as the voice of the marine terminal and stevedore industry, promoting marine cargo efficiency, security and safety, a clean environment, international trade, and economic growth and does so through advocacy, education, and industry cooperation. Mr. Crowley also serves as the Executive Director of the National Maritime Safety Association that represents the marine cargo handling industry in matters of health and safety.

Prior to becoming NAWE’s Executive Director, Mr. Crowley served as Senior Vice President, Law and Regulatory Affairs for APM Terminals North America Inc. beginning in July of 2008 until May of 2014. At APM Terminals he also served in leadership roles for safety, security and environmental matters at facilities across North, Central and South America.

Mr. Crowley served and retired as a Rear Admiral in the U.S. Coast Guard in 2008 after 33 years of active service. He served in both senior operational and legal positions as well as in five Cutters, twice in Command. He commanded the first medium endurance cutter to serve in an extended out-of-hemisphere deployment with the USN. His last assignment was as the Ninth District Commander, headquartered in Cleveland, Ohio, responsible for maintaining maritime safety, security and environmental protection throughout the Great Lakes, extensively coordinating with state, federal and international organizations. He earlier served as the Judge Advocate General and Chief Counsel to the Commandant.

Mr. Crowley is the Chair of the National Maritime Security Advisory Committee for the Department of Homeland Security. In 2016 he participated as a member of the Fleet Independent Review Team chartered by NOAA. He is a Trustee for St. Thomas Academy in Mendota Heights, Minnesota where he attended high school.