Report a Claim Member Access
When autocomplete results are available use up and down arrows to review and enter to select.
Oct 22, 2018

Understanding how the body gets injured provides insight on prevention strategies to minimize the cost of these injuries and improve the efficiency of operations.

Injury occurs when the tissue (e.g., muscle, tendon, or ligament) experiences an applied force (or stress) that is greater than the tissue’s tolerance (e.g., the strength of the tissue, or the body’s ability to cope with the stress).

The mechanism of injury – the method by which damage occurs – can be expressed mathematically as: Applied Force > Tissue Tolerance = Injury2

This mechanism applies to all injuries.  There are three possible prevention strategies to prevent an injury:

There are four modes or types of injuries.

1. High Force Injuries. These injuries are associated with a single high force event (e.g., slip, trip, or fall). This is illustrated in figure 1 below. At point A on the graph, the applied force is less than the tissue tolerance, resulting in a "margin of safety" and no injury.  At point B, the applied force exceeds the tissue tolerance, at which point an injury occurs.

This is an example of an acute injury caused by a single high force event.  Common examples of these types of injuries include a trip or fall, being struck by an object, or a motor vehicle accident.  These are the traditional injuries seen in the occupational health and safety field, where there is a specific event that caused the injury.  The image shows an example of an employee slipping on an icy surface, resulting in a fall to the hard ground with a high magnitude of force to the back. 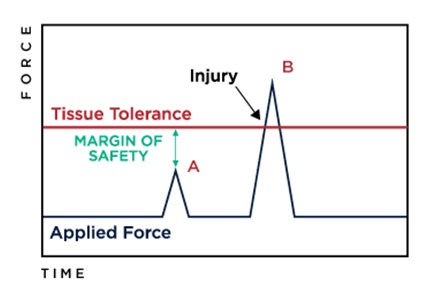 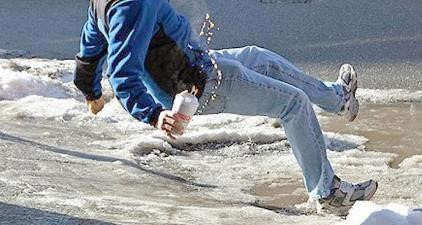 An employee slipping on an icy surface, resulting in a fall to the hard ground with a high magnitude of force to the back.

2. Low Repetitive Force Injuries. Unfortunately, high force injuries described above are not the most common for overexertion or strain injuries. More commonly, injuries during occupational and athletic activities involve cumulative trauma from repetitive forces within the body’s capabilities. In these situations, the injury is the result of accumulated trauma from either repeated application of low force or the application of a sustained force for a long duration.

As illustrated in figure 2 below, an applied force that is below the tissue tolerance is performed repetitively over time and slowly reduces the tissue's tolerance. Eventually, the margin of safety approaches zero and an injury occurs.  Obviously, the higher the force application, the quicker the fatigue. This is an example of the classic repetitive motion type injury.  Occupational examples include: repetitive hand grinding, pulling cables, unloading a pallet of boxes, or any work on an assembly line.

A sports-related example would be a baseball pitcher. Major League Baseball uses the 100-pitch count rule as a way to minimize fatigue and reduce the potential risk of injury to the pitcher (that is, the red tissue tolerance line comes close to the maximum pitch count line).  This is the main reason why you see pitchers being removed from the game in later innings. 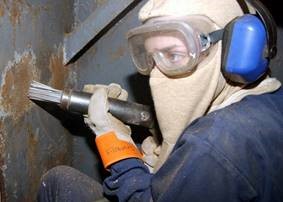 Rust removal is an example of a repetitive movement in shipbuilding and ship repair facilities.3

3. Sustained Force Injuries. Another way to produce an injury is to sustain the force constantly over a period of time.  As illustrated in figure 3 below, a constant force below the tissue tolerance is maintained, and over time the muscles slowly become tired due to lack of blood flow and oxygen, reducing the tissue's tolerance.  Again, the margin of safety approaches zero and the injury occurs.

Examples of this type of injury are from prolonged static postures, such as sitting or kneeling too long, working with your arms in the overhead, or prolonged back bending. The image shows an example of an employee who is working in a bend-over posture as part of his routine job tasks. 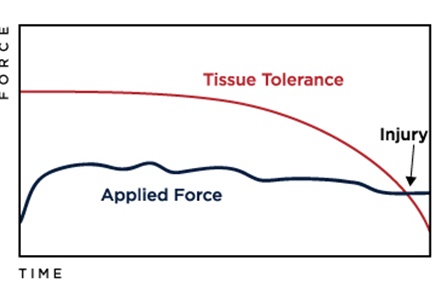 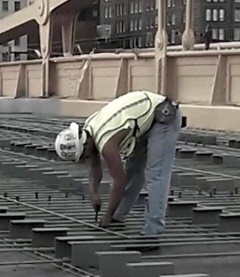 An employee who is working in a bend-over posture as part of his routine job tasks.

4. Injuries from Cumulative Trauma Over Years. The human body has an amazing ability to heal itself when given the right amount of rest and recovery.  When the amount of rest and recovery is not sufficient, the body cannot heal or repair itself, and it slowly starts to break down.  This occurs with the natural aging process, and our tissue tolerances are less compared to when we were younger. Eventually, the tissue tolerance levels decrease to a level of the applied load, making the margin of safety zero, resulting in an injury.

This is illustrated in figure 4, where cumulative loading and decreased tolerance after many years (decades or a career) of “wear and tear” on the body. This is common with employees who have spent their whole career exposed to the same risk factor (i.e., using vibratory tools or kneeling work) and is also very common in athletics (i.e., rotator cuff tendonitis in baseball pitchers). 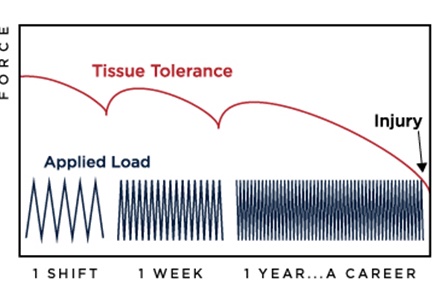 Understanding how the body gets injured allows us to develop effective injury prevention strategies.  Avoidance of stress on the body is undesirable; we need a certain amount of stress to maintain a healthy body. The objective of injury prevention strategies is to find the right amount of balance between the applied force (stress on the body), rest and recovery, tissue adaptation and minimizing the accumulation of microtrauma as illustrated in figure 5, also known as the training effect. 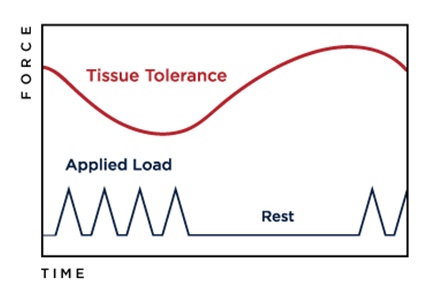 In summary, the body can become injured by repeating or sustaining high or low force applications. Focusing on just a single activity, such as an occasional heavy lift, may not result in a successful injury prevention strategy for jobs that have a wide variety of activities.  Use these graphs to help identify potential injury-causing mechanisms in your company and effective solutions to minimize the risks.

Next month, we’ll tie all the concepts together and highlight simple solutions for the shipyards, marine cargo handling facilities, and marine construction settings.

Ben Zavitz, CPE is the President and Chief Ergonomist of Ergo Human Performance LLC, an ergonomics and human performance consulting firm that has developed many unique tools, methods, solutions, and programs for the Maritime Industry that minimizes risks and losses, and maximizes efficiency and company goals.  He is a Board Certified Professional Ergonomist (CPE) with more than 20 years of experience implementing ergonomic, safety and process improvement programs for General Dynamics, Boeing and many Fortune 500 companies.  Ben was the lead author of the OSHA Voluntary Ergonomic Guidelines for Shipyards and participated in the National Shipbuilding Research Program (NSRP) projects to develop and test solutions to address ergonomic/injury risk factors.  He is a member of the CDC/NIOSH NORA Musculoskeletal Health Cross-Sector Council, Vice President of the Applied Ergonomics Society, and Program Chair for the Applied Ergonomics Conference, and has won several awards for his innovative and unique approach to ergonomics.