Report a Claim Member Login
When autocomplete results are available use up and down arrows to review and enter to select.
Jan 10, 2013 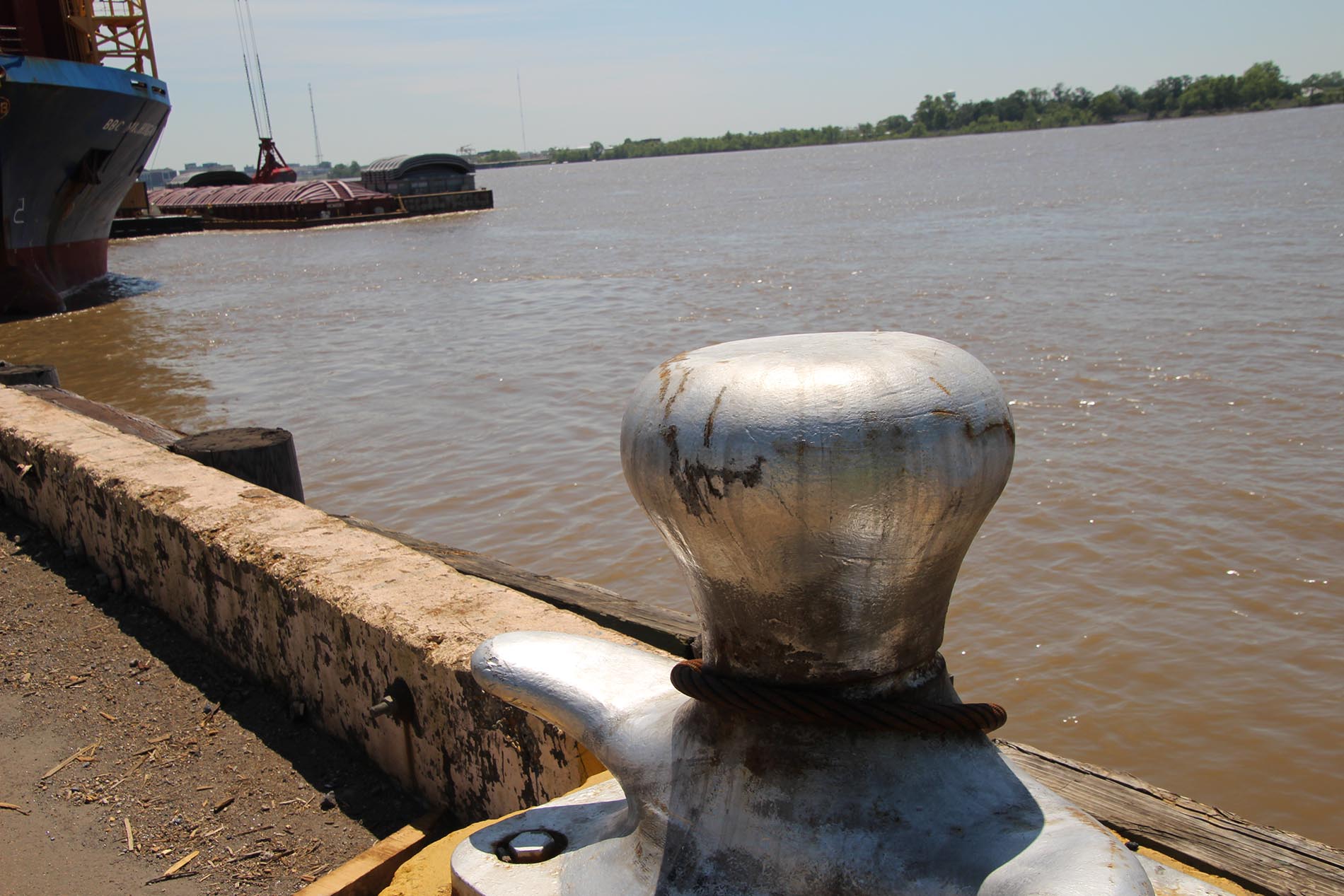 The situs coverage provision of the Longshore Act, Section 3(a) (33 U.S.C. 903(a)) has been discussed on several prior occasions here, and situs questions keep coming up.
We’ll just have to keep talking about it.  This time, the subject is the phrase, “other adjoining area” as used in Section 3(a).

Review of Some General Principles

To be covered under the Longshore Act, (1) an injured worker must have status as a maritime employee, i.e., be engaged in maritime employment, and (2) the injury must occur on a covered maritime situs.

Under Section 3(a) a covered situs is either (1) upon the navigable waters of the United States, (2) an “enumerated site” such as an adjoining pier, wharf, dry dock, terminal, building way, or marine railway, or (3) an “other adjoining area” customarily used by an employer in loading, unloading, repairing, dismantling, or building a vessel.

Situs is determined by the nature of the place of work at the moment of injury.

Situs does not mean the pinpoint spot of the injury, but the general surrounding area.

Outside of the federal Fourth Circuit Court of Appeals (MD, VA, WV, NC, SC), where “adjoining” means touching, or contiguous to, the word “adjoining” is interpreted to mean “to be close to”, or “to be near”, “neighboring” or “in the vicinity of”.  An “other adjoining area” does not have to be right next to the water.

While the status analysis under Section 2(3) is intended to minimize the problem of “walking in and out of coverage” by granting maritime employment status to any employee with any degree of regularly assigned maritime duties, you can come and go to and from a maritime situs and in the process “walk in and out of” Longshore Act coverage.

Let’s look at a situs analysis in a hypothetical situation that arguably could go either way.

An injury occurs at a business that devotes about one-half of its operation to repairing, constructing, and fabricating marine parts that come from and go to vessels at a navigable waterway about one mile away.  The parts are picked up, transported, and delivered by an independent trucking contractor.  The location obviously has no direct access to the water.  The non-maritime half of this employer’s business comes and goes over land from non-maritime customers.  All employees work on all projects at different times.

This business is not located within the jurisdiction of the federal Fourth Circuit Court of Appeals.

The business’ immediate neighbors are one half maritime and one half non-maritime commercial/industrial operations and there is a similar mix in the general commercial and industrial area between it and the navigable waterway.

One mile to the west and south of where the business is located is the navigable waterway.  Just beyond the business to the north and east is an interstate highway system with service roads and beyond that begins residential areas.  So, the overall area from the water out to the highway is commercial/industrial, with about one half of the businesses devoted to maritime activity.

The site was selected by the owners primarily because of the generally cheaper rents for property in the industrial part of town by the waterfront, because of the regular volume of marine work coming from the water, and also because of its convenient location near the highway.  We don‘t know whether the business could have found property closer to the water back when the lease was originally signed, but being close to the water was a factor in choosing the property.

Assuming that the employees meet the status requirement for coverage, is this a covered Longshore situs?

Proximity to the water – We know that so long as the site is close to or in the vicinity of navigable waters, or in a neighboring area, it can be a covered Longshore situs.  As a general proposition the site does not have to be right next to the water.  And nearness to the water’s edge is one, but only one, of the factors considered in the geographic nexus test.  In our hypothetical, the issue is whether one mile is close enough for Longshore coverage if other factors lean toward establishing that the overall area is customarily used for maritime activity.

While discussing situs on October 19, 2012, I tried to make the point that there is no hard line in determining whether a site meets the geographic test.  No distance has been found to be automatically too far from the water.  One mile is definitely not too far as a factor standing alone.

Intervening properties – the area between the injury site and the water is mixed commercial use, also mostly ship repair, parts fabrication, and container repair, as well as non-maritime commercial operations.  The roads are full of trucks coming and going to and from the water with ship parts and cargo containers.

This degree of maritime activity could very well be sufficient to characterize the entire area between the water and the highway as an “other adjoining area”.  The area is not exclusively or primarily devoted to maritime use (50/50), but there is significant maritime activity throughout the area.

Whether it’s the “Herron” factors used by the Ninth Circuit, or the less formulaic but generally parallel analyses used by most of the other circuits, courts look at all of the facts in determining whether the area of the injury is part of an overall “other adjoining area” customarily used for maritime activity.

So far, we’ve looked at distance from the water and the character of surrounding and intervening properties.  Other factors to be considered are suitability of the site for maritime uses and whether the adjoining site is as close to the water as “feasible”.

Suitability of the site for maritime uses – in our hypothetical, the site was chosen, in part, because one half of the employer’s business consists of repairing and fabricating parts for vessels on the water that is one mile away, easily accessible by truck.  This rationale for choosing the site is relevant in favor of finding that the site of the injury is an “other adjoining area.”  Maritime business considerations played at least a part in the selection.  It is also possible that at the time that the business owner was selecting his location there was nothing available closer to the water.

Feasible? – is it as close to the water as feasible?  This element doesn’t lend itself to straightforward analysis.  I think that “feasible” is a difficult word.  It doesn’t even fit this type of maritime centered analysis.  It involves consideration of cost, convenience, availability, suitability, timing, economic considerations, labor, and any number of other business and personal considerations.  The “feasible” question is “will it work”.  This involves many factors other than maritime considerations.  But, the courts have used this word, and so will we.  Clearly, this site works because a successful business uses the water as the source for one half of its business.

Based on the facts in our hypothetical, the overall area, not the pinpoint spot of the injury, is about fifty-fifty commercial maritime and non-maritime.  This includes the area between our employer and the water, as well as the employer’s immediate neighbors.  Access to the water is convenient by truck.  Even at a distance of one mile, a reasonable person could conclude that the overall area is one customarily used for significant maritime activity.  Remember, it doesn’t have to be exclusively, or even primarily, maritime use.

After considering the proximity to the water, the suitability of the site for maritime purposes, the use of the adjoining properties and the properties between the injury site and the water, and whether the site is as close to the water as feasible, I think that there is enough “substantial evidence” to support a conclusion that the injury site passes the geographic nexus test.

In our hypothetical, I think that this is the easy part.  Fifty percent of the employer’s business comes from and goes to vessels on the navigable water one mile away.  Half of its business depends on its relation to that particular waterway.  I think that this passes the functional nexus test.

In the federal circuit courts of appeal from which most Longshore cases arise, situs and status determinations by administrative law judges are considered to be findings of fact.  This is important because an administrative law judge’s findings will be affirmed if supported by substantial evidence, which as we know is a lesser burden than by a preponderance of the evidence.

NOTE:  Substantial Evidence is usually defined as “… relevant evidence – more than a scintilla but less than a preponderance – that would cause a reasonable person to accept the fact finding.”

An appellate reviewer will defer to and affirm the findings of the ALJ if they are supported by substantial evidence even if the reviewer would have reached a different conclusion on the same facts.

This in turn is important because of the approach taken by the ALJs in evaluating coverage issues.  As expressed in often quoted language from the U.S. Supreme Court, “The language of the (1972) amendments is broad and suggests that we should take an expansive view of the extended coverage.  Indeed, such a construction is appropriate for this remedial legislation.  The Act ‘must be liberally construed in conformance with its purpose and in a way which avoids harsh and incongruous results’” (Northeast Marine Terminal Company, Inc. et al. v. Ralph Caputo et al., also quoting from Voris v. Eikel).  The adjudicators are liberal on coverage issues.

“… our previous cases have implicitly eliminated any meaningful, independent proximity based requirement from the statute’s situs provisions.”

“As long as each case is only incrementally more expansive than the last, it is bound to be upheld.  Accordingly, the LHWCA is gradually swallowing every employer in the vicinity of a port.”

Draw your own conclusions.  The lesson is clear.  If you’re anywhere near a navigable waterway, don’t take any chances.  Apply your own presumption of coverage.  Get insurance under the Longshore Act.